I mentioned in a previous post that I like to stick with Apple’s stock apps for Calendar, Reminders, Notes, Email and other admin and productivity focused apps. They’re good enough to do what I need without too much fiddling. However, there are a few inconsistencies that, if resolved, would make me even happier using them all.

In Notes.app, I have many lists of notes, and I’ve grouped some of them into hierarchies depending on if they deal with business or clients, to name a few. Otherwise, I’d have a really long flat list of notes. The one quirk here is that a group not only holds subgroups and member lists, but itself is also a list of notes. I can’t think of another example of this kind of grouping mechanism. It has pros and cons; I’m not sure if I fully like it or not, but I do make use of it.

Don't worry about the gray areas... wouldn't want to spoil any upcoming posts!

I also have lots of Reminders lists; I’d love a way to group them as I do with Notes. Same goes for my list of Calendars, accounts in Mail, lists of Contacts, and maybe even Messages. 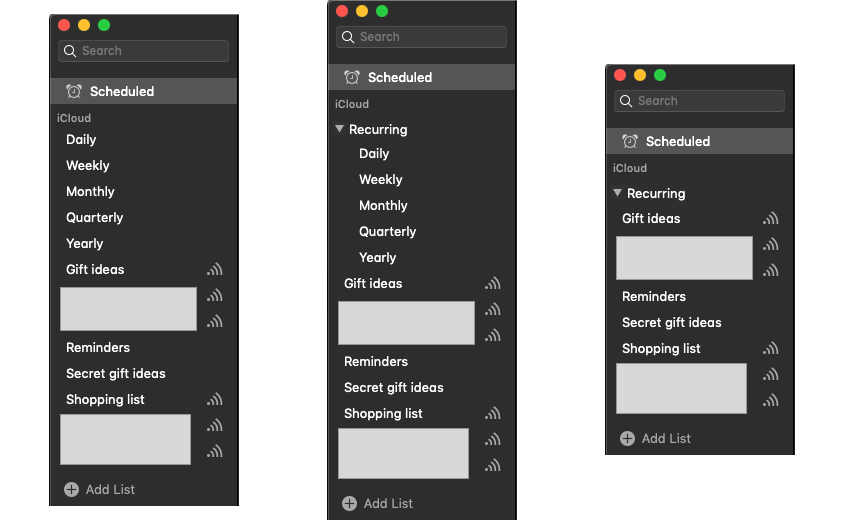 Reminders' left panel as it is today (left). Collapsable groups (center, expanded; and right, folded) would help tidy things up just like in Notes.

If groups in Calendar also had a hide/show checkbox, it’d be much more convenient to switch between entire segments of your life. 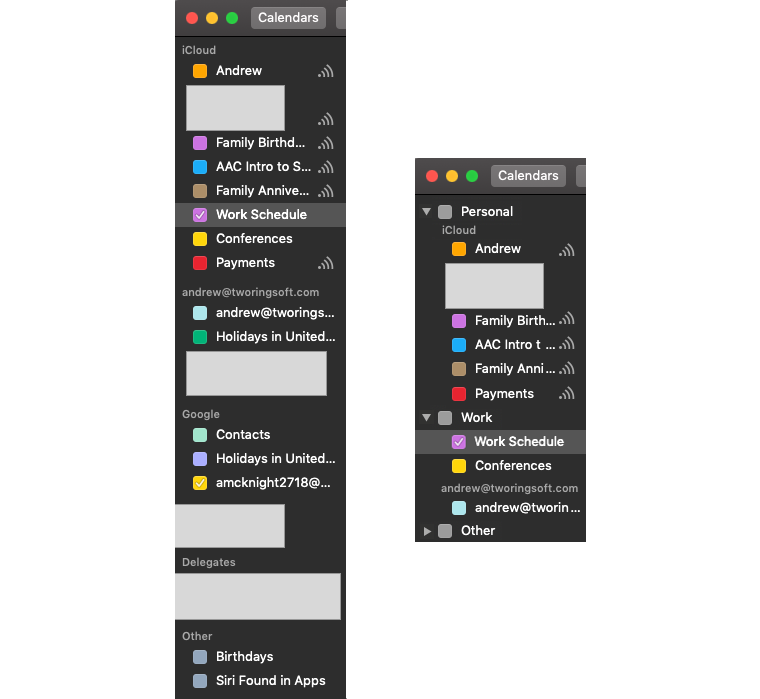 Calendar's left panel as it is today (left) and with calendars grouped together (right).

Come to think of it 🤔 groups are really just tags!

Hierarchical organization is a great first step, but I also find myself needing to create cross-cutting categories of notes. Other note-taking apps I’ve used like Bear and Letterspace allow you to specify tags in notes, even inline with control characters like # and @, providing multiple types of tags. (They’re really tags for tags, but we don’t have to go there.)

This would better help to organize content the same way knowledge is connected in our minds: not just a tree, but a general graph. For instance, in Notes.app, I have an “ideas” note for each of my clients, my personal apps, and software and life in general. I also keep a long, flat, reverse-chronological “daily notes” note for each client, and one for general business. Instead of managing the group structures myself, I want to tag certain notes and be able to change the tree UI in the left pane to represent tag groups (instead of, you know, group groups).

In the end, I’d love to see Apple reuse the UI and logic from Notes in Calendar et al to allow custom nested groups. It’d be great to see them add tagging, whether similar to other note-taking apps like Letterspace, or more like that in Finder… and provide ways to organize everything by those tags as well as groups.

In general, whenever a user has some set of their data, they might find it helpful to be able to organize the collection in arbitrary ways. A simple tagging facility helps solve that problem.